These probabilistic return assumptions depend on current market conditions and, as such, may change over time.

IMPORTANT: The projections or other information generated by the Vanguard Capital Markets Model® regarding the likelihood of various investment outcomes are hypothetical in nature, do not reflect actual investment results, and are not guarantees of future results. Distribution of return outcomes from the VCMM are derived from 10,000 simulations for each modeled asset class. Simulations are as of June 30, 2020. Results from the model may vary with each use and over time. For more information, see the Notes section.

Economic growth may slow later in the year

Recent data releases suggest that the initial stages of recovery in the United States, Europe, and the Asia-Pacific region are proceeding at a slightly faster pace than Vanguard had anticipated. However, as signs emerge of second waves of COVID-19 infection, we expect the pace of recovery to slow later in the year as localized lockdowns dampen activity and pent-up demand fades. The progression of COVID-19 and the prospects for a vaccine remain the key drivers of economic activity globally.

United States. GDP in the United States declined at a pace of –32.9% on an annualized basis in the second quarter, near the more optimistic end of our –30% to –40% estimate. Vanguard expects a more gradual recovery than consensus estimates amid continued virus transmission and consumer reluctance to engage in face-to-face activity.

We continue to expect a 2020 U.S. economic contraction in a range of –7% to –9%, an outlook that assumes that regional virus outbreaks and associated restrictions on economic activity will occur, but that nationwide lockdowns won't be required.

We believe the strength of recovery depends upon implementation of additional fiscal support and advocate that it be targeted at struggling businesses and households to minimize permanent effects to the economy, or "scarring."

The image shows Vanguard’s expectation that the percentage point change in quarterly GDP as a whole for the United States will fall more sharply in the second quarter of 2020 then recover more slowly through much of 2021 than the part of GDP attributable to the supply shock from COVID-19. Even at the end of 2021, GDP as a whole is forecast to be below its previrus trend level. 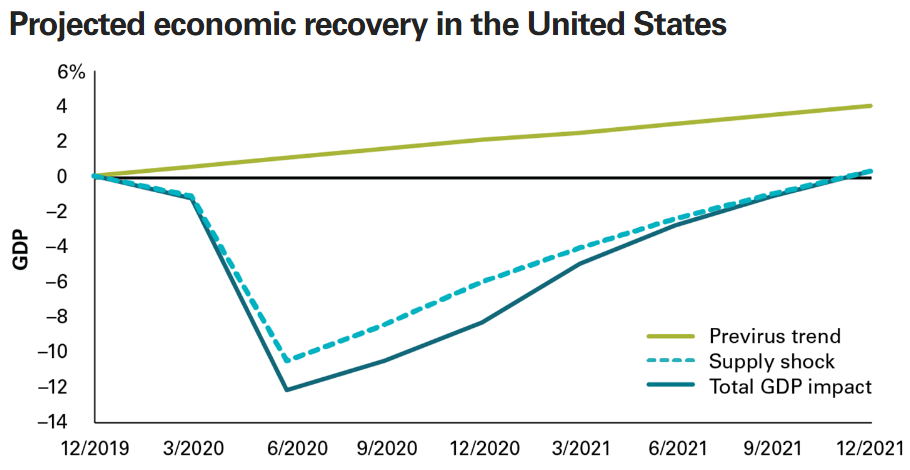 Notes: The chart shows our expectation for the level of impact on real GDP. The total GDP impact signifies the percentage-point change in the level of GDP.

Euro area. The euro area economy contracted by –12.1% in the second quarter compared with the first quarter, according to preliminary estimates.

We continue to foresee full-year contraction around –10% for the euro area economy.

China. Ahead of most of the world in the timetable of its recovery, China was affected by the virus and containment efforts first. Its GDP grew by a greater-than-expected 11.5% in the second quarter compared with the first quarter, having contracted by –10%.

Vanguard continues to foresee full-year growth for China in a 1% to 3% range.

Emerging markets. The International Monetary Fund foresees emerging markets contracting by –3.0% before rebounding to growth of 5.9% in 2021.

The outlook for Latin America, under assault from COVID-19, is particularly pessimistic.

Emerging markets will be watching developments in U.S.-China relations, which have implications for supply chains and trade-related growth.

Given our expectation for a slow recovery in demand amid pandemic containment efforts, Vanguard continues to expect monetary policy to remain loose throughout 2020 and well into 2021, with risks skewed toward further easing.

The U.S. Federal Reserve emphasized that the course of the economy depends on the progression of COVID-19, a view that Vanguard has held since the pandemic began. In its most recent summary of economic projections, issued in June, the Fed suggested it would leave its target range intact through 2022.

Trade has reached an inflection point

The postponement on August 15 of a review of Phase One of the U.S.-China trade deal was met with a collective shrug. The cancellation attributed to scheduling difficulties, amid reports that China was struggling to meet required purchases of U.S. goods under the deal, removed for now the potential for disagreement on a topic that has roiled markets. Disagreements haven't gone away, however; in fact, they're piling up, with the most recent centered on Chinese-made apps and data collected from them in the United States.

Meanwhile, data from national sources confirms one of the steepest drops in global trade ever recorded occurred in the May–June period, amid COVID-19 lockdowns. China, buoyed by exports of virus-related products such as pharmaceuticals, personal protective equipment, and home-office supplies, was a notable exception.

Vanguard believes that trade reached an inflection point at midyear and has bounced off lows, with our index of leading indicators increasing for a third consecutive month.

Core inflation, which strips out volatile food and energy prices, rose 0.6% in July, its largest monthly increase since 1991, and to 1.6% compared with a year earlier. Vanguard doesn't see the higher-than-expected numbers to be part of a meaningful firming trend, but rather a modest uptick consistent with our medium-term view that, as states reopen and activities resume, inflation could trend gradually higher but remain below the Fed's 2% target range.

Risks of disinflation—a slowing in the pace of inflation—persist should disease outbreaks and containment efforts curtail demand.

Expect a gradual recovery in employment

Vanguard expects pockets of COVID-19 outbreaks to produce a rolling recovery in U.S. unemployment in the medium term, with job losses possible in some months. Overall, we expect a gradual recovery in the number of employed people and a reduction in the unemployment rate by year’s end to a range of 8% to 10%.